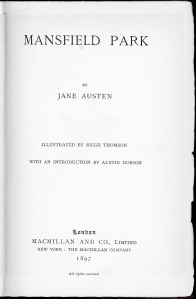 My copy of Mansfield Park was published in 1897 by Macmillan Publishers (founded in 1843 by brothers Daniel and Alexander Macmillan). It has an introduction by Austin Dobson and is illustrated by Hugh Thomson.

Henry Austin Dobson (1840-1921), was an English poet. He also wrote many critical and biographical works, including introductions to all of Jane Austen’s works. The latter were published from 1895 to 1897 as part of Macmillan and Co.’s “Illustrated Standard Novels” Series. A bibliography of Dobson’s writings was published by Francis Edwin Murray in 1900 and can be found on Google Books.

Hugh Thomson (1860-1920) was born in Ireland and moved to London after he married Jessie Naismith Miller. There he illustrated many books for Macmillan and Co., including all six of Jane Austen’s novels. He also illustrated two books of poems for his friend Austen Dobson, The Ballad of Beau Brocade (1892) and The Story of Rosina (1896). Thomson was one of the most popular illustrators of his time, and his illustrations of Jane Austen’s novels are some of the most famous done for them.