“You need not hurry when the object is only to prevent my saying a bon mot, for there is not the least wit in my nature. I am a very matter-of-fact, plain-spoken being, and may blunder on the borders of a repartee for half an hour together without striking it out.”  — Edmund Bertram (Mansfield Park, Ch. 9)

“Bon mot” (pronounced “bän mō”) is a French phrase, literally meaning “good word”. A bon mot is a witty repartee, a clever remark, a witticism. Edmund Bertram may have been at a loss for a witty saying, but Jane Austen certainly was not. Here is a list I’ve collected of witty and interesting quotations from Mansfield Park: 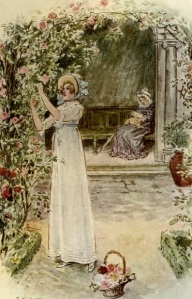 But there certainly are not so many men of large fortune in the world as there are pretty women to deserve them. (Ch. 1)

“I hope she will not tease my poor pug,” said Lady Bertram; “I have but just got Julia to leave it alone.” (Ch. 1)

Mrs. Norris … consoled herself for the loss of her husband by considering that she could do very well without him … (Ch. 3)

Lady Bertram … felt all the injuries of beauty in Mrs. Grant’s being so well settled in life without being handsome … (Ch. 3)

“If poor Sir Thomas were fated never to return, it would be peculiarly consoling to see their dear Maria well married,” she very often thought; always when they were in the company of men of fortune … — Mrs. Norris (Ch. 4)

Mr. Rushworth was from the first struck with the beauty of Miss Bertram, and, being inclined to marry, soon fancied himself in love. (Ch. 4)

After dancing with each other at a proper number of balls, the young people justified these opinions, and an engagement, with a due reference to the absent Sir Thomas, was entered into, much to the satisfaction of their respective families, and of the general lookers-on of the neighbourhood, who had, for many weeks past, felt the expediency of Mr. Rushworth’s marrying Miss Bertram. (Ch. 4)

It was some months before Sir Thomas’s consent could be received; but, in the meanwhile, as no one felt a doubt of his most cordial pleasure in the connexion, the intercourse of the two families was carried on without restraint, and no other attempt made at secrecy than Mrs. Norris’s talking of it everywhere as a matter not to be talked of at present. (Ch. 4)

“An engaged woman is always more agreeable than a disengaged. She is satisfied with herself. Her cares are over, and she feels that she may exert all her powers of pleasing without suspicion. All is safe with a lady engaged: no harm can be done.” — Henry Crawford (Ch. 5)

“My dear child, there must be a little imagination here. I beg your pardon, but I cannot quite believe you. Depend upon it, you see but half. You see the evil, but you do not see the consolation. There will be little rubs and disappointments everywhere, and we are all apt to expect too much; but then, if one scheme of happiness fails, human nature turns to another; if the first calculation is wrong, we make a second better: we find comfort somewhere — and those evil-minded observers, dearest Mary, who make much of a little, are more taken in and deceived than the parties themselves.” — Mrs. Grant (Ch. 5)

A young woman, pretty, lively, with a harp as elegant as herself, and both placed near a window, cut down to the ground, and opening on a little lawn, surrounded by shrubs in the rich foliage of summer, was enough to catch any man’s heart. The season, the scene, the air, were all favourable to tenderness and sentiment. Mrs. Grant and her tambour frame were not without their use: it was all in harmony; and as everything will turn to account when love is once set going, even the sandwich tray, and Dr. Grant doing the honours of it, were worth looking at. (Ch. 7)

“[T]he heat was enough to kill anybody. It was as much as I could bear myself. Sitting and calling to Pug, and trying to keep him from the flower-beds, was almost too much for me.” — Lady Bertram (Ch. 7)

Dinner was soon followed by tea and coffee, a ten miles’ drive home allowed no waste of hours; and from the time of their sitting down to table, it was a quick succession of busy nothings till the carriage came to the door … (Ch. 10)

In all the important preparations of the mind she was complete: being prepared for matrimony by an hatred of home, restraint, and tranquillity; by the misery of disappointed affection, and contempt of the man she was to marry. (Ch. 21)

It was a very proper wedding. The bride was elegantly dressed; the two bridesmaids were duly inferior; her father gave her away; her mother stood with salts in her hand, expecting to be agitated; her aunt tried to cry; and the service was impressively read by Dr. Grant. Nothing could be objected to when it came under the discussion of the neighbourhood, except that the carriage which conveyed the bride and bridegroom and Julia from the church-door to Sotherton was the same chaise which Mr. Rushworth had used for a twelvemonth before. In everything else the etiquette of the day might stand the strictest investigation. (Ch. 21)

“No, I will not do her any harm, dear little soul! I only want her to look kindly on me, to give me smiles as well as blushes, to keep a chair for me by herself wherever we are, and be all animation when I take it and talk to her; to think as I think, be interested in all my possessions and pleasures, try to keep me longer at Mansfield, and feel when I go away that she shall be never happy again. I want nothing more.” — Henry Crawford (Ch. 24)

Children of the same family, the same blood, with the same first associations and habits, have some means of enjoyment in their power, which no subsequent connexions can supply; and it must be by a long and unnatural estrangement, by a divorce which no subsequent connexion can justify, if such precious remains of the earliest attachments are ever entirely outlived. Too often, alas! it is so. Fraternal love, sometimes almost everything, is at others worse than nothing. (Ch. 24)

“[Edmund] knows that human nature needs more lessons than a weekly sermon can convey; and that if he does not live among his parishioners, and prove himself, by constant attention, their well-wisher and friend, he does very little either for their good or his own.” — Sir Thomas Bertram (Ch. 25)

He wished him to be a model of constancy; and fancied the best means of effecting it would be by not trying him too long. (Ch. 35)

I believe there is scarcely a young lady in the United Kingdoms who would not rather put up with the misfortune of being sought by a clever, agreeable man, than have him driven away by the vulgarity of her nearest relations. (Ch. 41)

Everybody at all addicted to letter-writing, without having much to say, which will include a large proportion of the female world at least, must feel with Lady Bertram that she was out of luck in having such a capital piece of Mansfield news as the certainty of the Grants going to Bath, occur at a time when she could make no advantage of it, and will admit that it must have been very mortifying to her to see it fall to the share of her thankless son, and treated as concisely as possible at the end of a long letter, instead of having it to spread over the largest part of a page of her own. For though Lady Bertram rather shone in the epistolary line, having early in her marriage, from the want of other employment, and the circumstance of Sir Thomas’s being in Parliament, got into the way of making and keeping correspondents, and formed for herself a very creditable, common-place, amplifying style, so that a very little matter was enough for her: she could not do entirely without any; she must have something to write about, even to her niece; and being so soon to lose all the benefit of Dr. Grant’s gouty symptoms and Mrs. Grant’s morning calls, it was very hard upon her to be deprived of one of the last epistolary uses she could put them to. (Ch. 44)

Fanny had been everywhere awake to the difference of the country since February; but when they entered the Park her perceptions and her pleasures were of the keenest sort. It was three months, full three months, since her quitting it, and the change was from winter to summer. Her eye fell everywhere on lawns and plantations of the freshest green; and the trees, though not fully clothed, were in that delightful state when farther beauty is known to be at hand, and when, while much is actually given to the sight, more yet remains for the imagination. (Ch. 46) 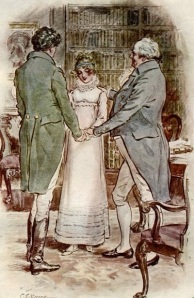 Let other pens dwell on guilt and misery. I quit such odious subjects as soon as I can, impatient to restore everybody, not greatly in fault themselves, to tolerable comfort, and to have done with all the rest. (Ch. 48)

These were reflections that required some time to soften; but time will do almost everything … (Ch. 48)

I purposely abstain from dates on this occasion, that every one may be at liberty to fix their own, aware that the cure of unconquerable passions, and the transfer of unchanging attachments, must vary much as to time in different people. (Ch. 48)

She was of course only too good for him; but as nobody minds having what is too good for them, he was very steadily earnest in the pursuit of the blessing … (Ch. 48)

It was a match which Sir Thomas’s wishes had even forestalled. … and the joyful consent which met Edmund’s application, the high sense of having realised a great acquisition in the promise of Fanny for a daughter, formed just such a contrast with his early opinion on the subject when the poor little girl’s coming had been first agitated, as time is for ever producing between the plans and decisions of mortals, for their own instruction, and their neighbours’ entertainment. (Ch. 48)

With so much true merit and true love, and no want of fortune and friends, the happiness of the married cousins must appear as secure as earthly happiness can be. (Ch. 48)

3 comments on “Bon Mots: A Collection of ‘Mansfield Park’ Quotations”