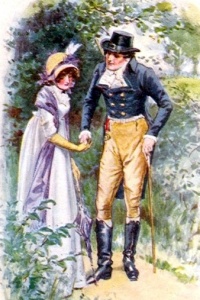 In Pride and Prejudice by Jane Austen, Elizabeth Bennet’s youngest sister, Lydia, runs away with the unscrupulous George Wickham, disgracing her family. Unknown to Elizabeth, Mr. Darcy tracks down Wickham and bribes him to marry Lydia, a proceeding which causes Darcy a great deal of mortification, as he detests Wickham, and money — possibly an entire year’s income. He does this because he feels responsible for not having exposed Wickham’s true character before, and to make Elizabeth happy. He did not, however, intend for Elizabeth to know of his role in bringing the marriage about, lest it cause her uneasiness. (Elizabeth discovers it through her aunt.) Shortly afterwards, Mr. Darcy proposes to Elizabeth and is accepted. 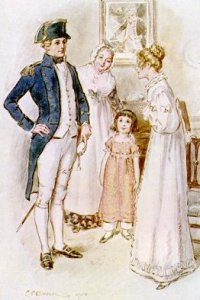 In Mansfield Park, Henry Crawford also does something that makes the woman he loves grateful to him by helping someone in her family. He introduces Fanny Price’s beloved brother William, a midshipman, to his uncle, Admiral Crawford. Henry tells Fanny, “My uncle … has exerted himself, as I knew he would, after seeing your brother.” Admiral Crawford uses his influence to get William made a lieutenant. Fanny is overjoyed. Unlike Mr. Darcy, however, Henry Crawford does this to excite Fanny’s gratitude. He tells Fanny what he has done, and attempts to use her gratitude to secure her acceptance to his marriage proposal.

Mr. Darcy is an upright, honourable, generous man, while Mr. Crawford is devious and manipulative. Still, for different reasons, the proposals of either man could be considered flattering. Mr. Darcy is described as “so very fine a young man, with family, fortune, everything in his favour” (Ch. 5). On the occasion on which the Bennets first meet him, “Mr. Darcy soon drew the attention of the room by his fine, tall person, handsome features, noble mien, and the report which was in general circulation within five minutes after his entrance, of his having ten thousand a year” (Ch. 3). After she refuses Mr. Darcy’s first proposal, Elizabeth feels that,

In spite of her deeply-rooted dislike, she could not be insensible to the compliment of such a man’s affection …. That she should receive an offer of marriage from Mr. Darcy! That he should have been … [s]o much in love as to wish to marry her in spite of all the objections which had made him prevent his friend’s marrying her sister, and which must appear at least with equal force in his own case—was almost incredible! It was gratifying to have inspired unconsciously so strong an affection. (P&P, Ch. 34) 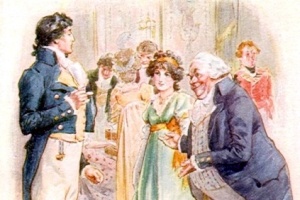 Sir Thomas is disagreeably surprised when he finds that his niece Fanny intends to refuse Henry Crawford. He tells Fanny,

“Here is a young man … with everything to recommend him: not merely situation in life, fortune, and character, but with more than common agreeableness, with address and conversation pleasing to everybody …. a young man of sense, of character, of temper, of manners, and of fortune, exceedingly attached to you, and seeking your hand in the most handsome and disinterested way; and let me tell you, Fanny, that you may live eighteen years longer in the world without being addressed by a man of half Mr. Crawford’s estate, or a tenth part of his merits.” (MP, Ch. XXXII).

Crawford’s sister, Mary, thinks that Fanny should be flattered by her brother’s proposal for another reason.

“Ah! I cannot deny …. [h]e has now and then been a sad flirt, and cared very little for the havoc he might be making in young ladies’ affections. I have often scolded him for it, but it is his only fault; and there is this to be said, that very few young ladies have any affections worth caring for. And then, Fanny, the glory of fixing one who has been shot at by so many; of having it in one’s power to pay off the debts of one’s sex! Oh! I am sure it is not in woman’s nature to refuse such a triumph.” (MP, Ch. XXXVI)

Fanny disagrees. She tells Mary, “I cannot think well of a man who sports with any woman’s feelings; and there may often be a great deal more suffered than a stander-by can judge of” (Ch. XXXVI).

Elizabeth and Fanny both refuse these “great catches”, for about the same reasons — they do not love them and do not think well of their characters. Fanny, of course, has the additional reason that she is in love with someone else (a much more principled man than Mr. Crawford), and Elizabeth, in due course, finds that her opinion of Mr. Darcy was unjust, falls in love with him, and accepts his second proposal.

9 comments on “A Gratifying Proposal: Mr. Darcy vs. Mr. Crawford”